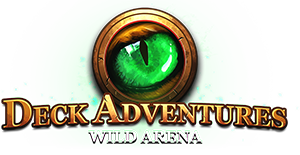 Deck Adventures – Wild Arena is a real-time customizable card game complete with deck building and online leaderboard features. It contains 60+ cards each with unique combinations of special traits for players to use in battle.

As co-producer / co-product owner I took over responsibility for the production of the game for about six months, halfway through the project. During that time, I worked with the lead game designer, programmers and artists to improve and expand upon the game’s mechanics, tutorials, UI/UX design, soundscape and overall polish.

The game was released for both Android and iOS in Winter 2016.